Taught by Brent Abel - 10 National USA Titles in Singles & Doubles
2018 & 2019 Captain USA World Cup Teams (Umag, Croatia)
How To Offensively DRIVE Your Topspin Forehand
Without It Sailing Out or Landing Short
Let's See What Actually Works ...
( Read Below To See Everything You Get AND ...
How You Can Get Full Access To This Masterclass & Bonuses At No Charge ) 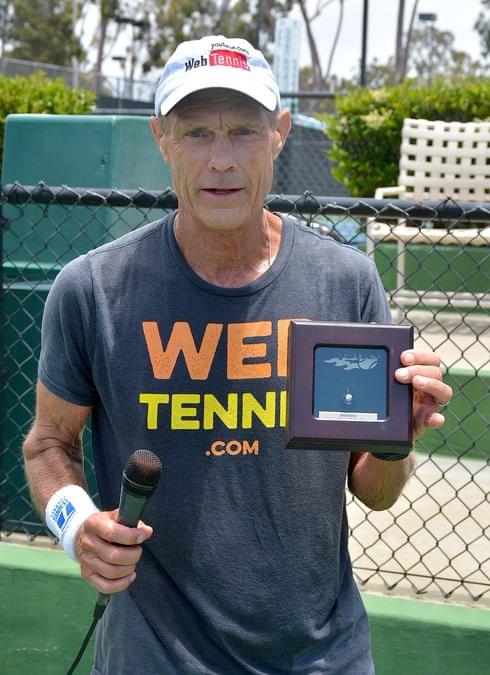 "Brent.
Thank you for making this course.
I've been trying for months to hit my forehand with an extreme grip and everything keeps landing short.
Plus my shoulder was stiffening up every time I used to play.  After just a few matches using your forehand fundamentals, the pain is gone.
Thank you!
Tim B., Portland OR
"Hi Brent.

I love my setup position for my forehand.  And my return of serve is SO much better!
I didn't think at 63 years old that I could get better, but I'm driving my forehand like never before and the ball is staying in!  Cool!
Jeff L., Atlanta GA
MORE raw topspin produced from extreme grips & complicated swing technique is clearly NOT the answer for you getting control of your topspin forehand ...
The answer to consistently driving your topspin forehand with accuracy control that moves through the bounce over there is stroke technique simplification that produces the optimal amount of topspin for safety over the net and doesn't land short.
The key to success is for you to actually do less with technique.
That's when any skill level player can produce a high quality topspin forehand.
And when you watch the videos in this course a couple of times, you won't need a ton of on-court practice time because the technique is so clean and simple.
From the same setup position, you'll be able to hit ...
Rally Balls
Passing Shots
Short Angle Rollers
Topspin Lobs
Return of Serves
Short Ball Approach Shots
Deep Looper Approach Shots
Drop Shots
Take It On-The-Rise
Inside Out & Inside In
Open & Closed Stance
With this simplified stroke technique, you'll also be able to disguise what shot you're about to play from the exact same setup ... your opponents won't know what's coming ;-)
Keep reading below to see everything you're gong to get in this instructional package AND how you can get it for FREE.
Here's everything you get ...
The Masterclass - How To Accurately Drive Your Topspin Forehand Without It Sailing Long or Landing Short

Includes ... FOREHAND Rally Ball, Passing Shot, Short Angle Roller, Topspin Lob, Return of Serve, Short Ball Approach, High Deep Looper Approach, Drop Shot, Take It On-The-Rise, Inside Out, Inside In, Open & Closed Stance.
(normally $97)
Bonus #1 VIDEO - How To Stop The "PEEKING" Habit (Looking Up) Before Contact So That You Don't Destroy Good Stroke Technique
When you build the habit of keeping your head and eyes still through contact, you bake massive confidence into your strokes.
(normally $57)
Bonus #2 MANUAL - How To Close Out Your Tough Matches Even If You Get Nervous At The End Of Your Sets & Matches
You've got to be super vigilant in managing your between points time because that's 80% of the time during your matches - the in between points and side changes time.
This Bonus is an 11 page manual that details my 4 part between points routine that has helped me win 10 national USA titles in singles & doubles.
(normally $57)
Bonus #3 COACHING CALL - 15 minute private one-on-one coaching call with me to help you zero in on the ONE thing with your topspin forehand that will quickly speed up your learning curve so that you get the results you want from your forehand ... faster.
(normally $65)
The Total Value of this instructional package for your topspin forehand is $276.
You can pick up this entire package for just a one-time charge of only $67 AND you can get inside for FREE.
Here's how ...
I am so confident I can help you get the results you want from your topspin forehand that I'm willing to let you get inside the entire instructional package at no charge for 72 hours to see if this is something that can really help you.
You'll get full access to the Masterclass and the Bonus courses for a full 72 hours.
If you love the instruction, then do nothing and your card will automatically get charged a one-time fee of just $67.
If you decide that this package isn't right for your game, for any reason, then no sweat, just let me know by email within 72 hours of your purchase and you won't get charged.
Plus, you'll get my additional player satisfaction 100% money back guarantee for another 6 months after your 72 hour trial period if you decide you're just not getting the results I've promised.
Sound fair?
Just fill in your payment details below to get started ...
Course
Price
Free for 3 days then 1 payments of $67
First & Last Names:
Email:
Your order has been declined. Please double check your Credit Card Details or contact support for information.
Credit Card Number:
CVC Code:
Expiration Month:
Expiration Year:
YES! I Want The FREE 72 Hour Trial Period! Get Immediate Access To The Entire Instructional Package